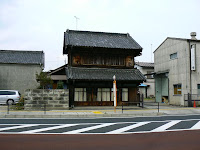 We could have walked from the train station to my Gma's house in about 20 minutes but, opted to catch the bus instead. Because the town Matsuri (festival) was taking place in an hour, the bus did not take its usual route and we ended up a few blocks away. Enroute, my mom pointed out a house that was close to hundred years old (with some remodeling of course). She told my dad and I about a time when she was just a little girl. My Gma took her and her sisters to the mountains to hide from soldiers who were burning towns and villages. My Gpa stayed back and eventually joined them in the mountains. He reported that their house was burned along with the vast majority in the vicinity. When they and the neighbors finally returned, there was one house that remained. This, unfortunately not my family's house, was the house.
Email Post